Glidden Gets You Going

To celebrate the new Glidden paint, the company launched the “Glidden Gets You Going” campaign nationally. Under this tagline, the campaign looks to disrupt paint industry conventions with an integrated approach aimed at inspiring consumers while also educating the Home Depot associate.

The multi-platform campaign was created by DDB New York and was supported by a team of agencies, including Liggett Stashower, which provided public relations and special event marketing services, and Hitchcock Fleming and Associates, which managed Web and social media activation.

The hfa team walked away with the Best in Show WebAward from the Web Marketing Association for its re-launched Web site, Glidden.com.

Eight months after launch user time on site had increased 221.6% YOY and average page views per visitor had shot up almost 600%.  Out of a possible 70-point total, the expert judges gave Glidden.com an impressive 69.5.

The campaign also kicked off with a free One Quart Giveaway in any of Glidden’s new 282 colors. Consumers could register for their free quart online with no strings attached. 300,000 free quarts were claimed within the first three days of the 10-day promotion. So many visitors came to the new site looking for the offer that the company opted to give those fans a substantial discount on the quart of their choice. Named as a WMA “standard of excellence” specifically for its integration with the “Glidden Paint Giveaway” promotion. The campaign helped drive traffic to the site and eventually boosted both page views and time spent on site by triple-digit percentages.

I coded and set up transactional and promotional emails in ExactTarget.  When a visitor completed an order during the “Get Color, Give Color” promotion the email was triggered and sent to a segmented list. During the Glidden “Gets You Going” product launch, customers were contacted and given a chance to be featured on Glidden Jumbotron in Times Square. 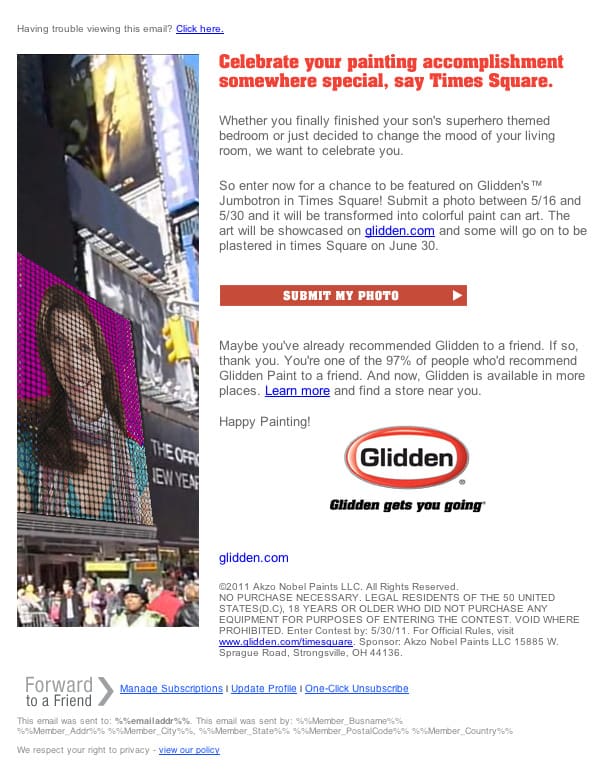 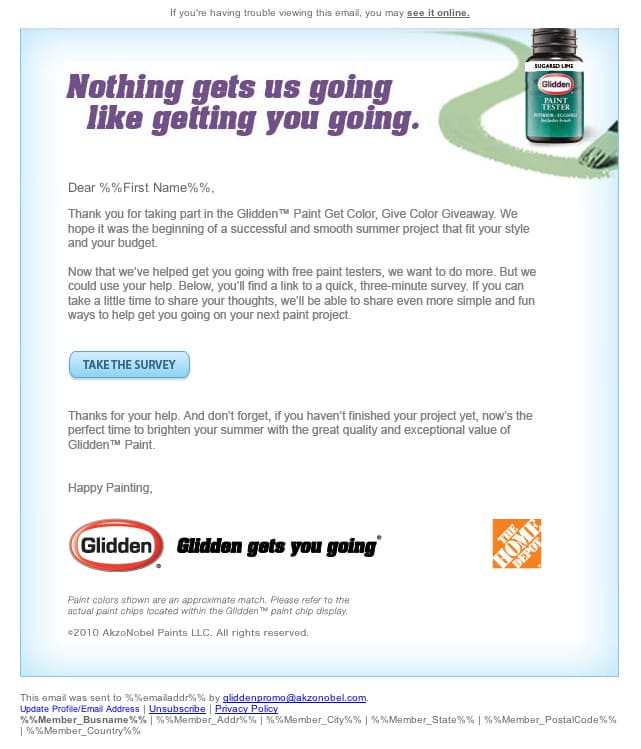 As a post-event spectator, this was the closest I ever got to seeing a Flash Mob, but I’ll take it.

Glidden worked with the Liggett Stashower agency to debut its new products and tools in Manhattan’s Union Square, where dozens of Broadway dancers, with paint cans and paint brushes in hand, converged for a colorful dance. Combined with a Glidden consumer exhibition, the event aimed to demonstrate how “You Don’t Have to be a Painter to Love Glidden” paints.